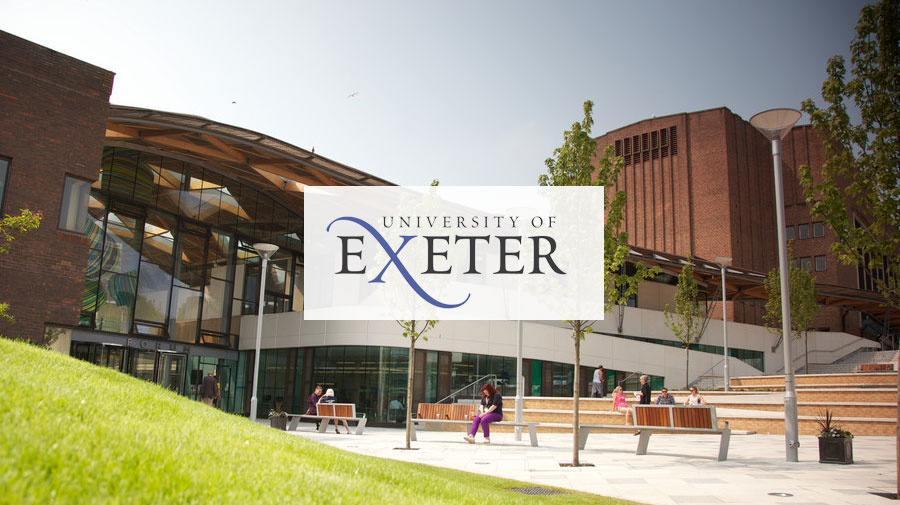 National Ranking: 10
Report an Error in the content of this Page
Represented Indirectly Through Associated Partners

The University of Exeter combines world class research with excellent student satisfaction at its campuses in Exeter and Cornwall. It is a member of the Russell Group of leading research-intensive universities. Formed in 1955, the University has 22,085 students from more than 130 different countries. Its success is built on a strong partnership with its students and a clear focus on high performance.

Recent breakthroughs to come out of Exeter's research include the identification and treatment of new forms of diabetes and the creation of the world's most transparent, lightweight and flexible conductor of electricity. Our research focuses on some of the most fundamental issues facing humankind today and, in order to continue our reputation, we are furthering investment in research infrastructure. Development of our new £52.5 million Living Systems research centre is now complete. It will focus on disease prevention through predictive biology and will eventually house 200 scientists. It follows a major refurbishment project, which saw the creation of world-class research and teaching facilities for Biosciences.

Exeter has always been among the leaders for student satisfaction in the National Student Survey. The senior management team has sought to build on this strength by putting student service at the centre of its strategy. The Students' Guild is involved at the earliest stages of strategic planning and given a major role in making spending decisions through a specially created Budget Scrutiny Group. This has led to a remarkable degree of joint thinking and team work.

The most visible expression of this partnership is the Forum, a £50m student services building which provides a centrepiece for the Streatham Campus and which opens onto an attractive piazza. It houses a purpose-built student services centre, 400-seat lecture theatre, a shop, bank and café. Other new facilities on the Streatham Campus include the INTO building which provides flexible teaching spaces, a lecture theatre and a learning resource centre for international students to improve their English.

The Penryn Campus has benefited from the Environment and Sustainability Institute; a £30 million interdisciplinary centre that leads cutting-edge research into the consequences of environmental change and the mitigation and management of its effects, while the Exchange building provides a lecture theatre, library facilities and spaces for small group discussions and exhibitions.

Exeter’s success has been built upon strong foundations of leadership, governance and management, a relentless focus on performance and a sector leading partnership with its students.

To support the achievement of Our Strategy 2016-2021, we have a series of key supporting strategies, known as our sovereign strategies. These sovereign strategies lead and direct our core activities to achieve our vision for the University.
Building upon Exeter’s success in the Research Excellence Framework 2014 (REF2014), our Research and Impact Strategy 2015-2020, aims to increase our research volume, quality and impact across our disciplines. It sets out how we will enhance our research environment, growing our academic community, and investing in new initiatives such as the Global Vision 2050 Project and the Global Systems Institute, to create opportunities for researchers to excel in the global research field.
The Education Strategy details how we will deliver an internationally exceptional educational experience for our students and enable them to make a positive difference in the world. We will deliver this through the provision of research-inspired learning, the development of employability, empowering and engaging learners, and multi-disciplinary learning.
The overarching aim of the Global Strategy 2018-2022 is to raise the University’s international reputation and achieve our aim of becoming a sustainable Global 100 research institution. The strategy defines how we will create a global culture and broaden excellence across our research and education – it supports all our strategies; Our Strategy, sovereign and enabling strategies, all of which depend in part upon how global we are as an institution.

Exeter is one of the top universities in the world
The Leiden Ranking offers key insights into the scientific performance of more than 900 major universities worldwide. The University is ranked 158th in the QS World University Rankings.

Awards and league table success
Exeter is one of the top universities in the world
Exeter is amongst the top 150 universities worldwide according to the Times Higher Education World University Rankings, the most influential global league table.
We are 7th in the UK, 9th in Europe and top 40 in the world in the CWTS Leiden Ranking, when the quality of publications is taken into account. The Leiden Ranking offers key insights into the scientific performance of more than 900 major universities worldwide.
The University is ranked 158th in the QS World University Rankings.
Exeter is a top UK university, according to all of the main higher education league tables
Each league table ranks more than 100 UK higher education institutions.
The Times and the Sunday Times Good University Guide ranks Exeter in 14th position in the UK.
Exeter was named The Times and The Sunday Times Sports University of the Year 2015-16 acknowledging the University as the best in the country in academic and athletic achievement across a wide range of sports. It recognises Exeter’s outstanding support for athletes, very high student satisfaction in sport-related programmes and world-leading research which enhances athletic performance at all levels. In 2012 the Sunday Times named us 'Sunday Times University of the Year'.
This year’s Guardian league table lists Exeter in 13th position out of 121 higher education institutions, and we are ranked 7th in the Russell Group of leading research intensive universities. The Medical School cemented its burgeoning reputation as one of the very best in the country, rising to 5th place nationally and once again retaining its place as best in the South West.  A wide range of subjects at the University secured top 10 positions: Religious Studies and Theology (4th), Sports Science (5th) and Engineering: Materials and Minerals (5th) also secured positions in the top five of the rankings. Drama (6th), Medical Imaging (6th) Politics (8th), Classics (8th) and Business, Management and Marketing (10th) complete the top 10 entries. Overall, 21 subjects feature in the top 20.
The Complete University Guide published in the Independent lists Exeter in 14th place.
The Queen's Anniversary Prize
The University has three times been awarded a prestigious Queen's Anniversary Prize. The most recent award was made to a team of scientists who have transformed the lives of hundreds of diabetes sufferers.

This is the second Queen's prize won by a member of staff at the Peninsula Medical School. The Dean, Professor John Tooke, won a Queen's Prize in 1996 also for work on diabetes. It is the third Prize won by the University.

The majority of students are based at our Streatham Campus. The campus is one of the most beautiful in the country and offers a unique environment in which to study, with lakes, parkland, woodland and gardens as well as modern and historical buildings. The centrepiece of Streatham Campus is the stunning Forum, which provides the Student Services Centre, a modern 24/7 library, technology-rich learning spaces, a 400-seat lecture theatre, the University’s reception, and retail and catering outlets. A new addition in 2018 were the student hubs – a collection of accessible spaces across campus where you can eat, socialise and study. Hubs include info points, where you can ask questions about your life as an Exeter student, from queries about your course or timetable, to wellbeing and careers. The city centre is only a 15-minute walk away so you can enjoy the advantages of a campus-based university without missing out on life in the city. The catered halls of residence and most of our purpose-built, self-catered flats are either on campus or nearby in the city centre, so you’ll have easy access to everything you’ll need.

Located on the eastern edge of the city centre, St Luke’s is home to Sport and Health Sciences, the Medical School, the Academy of Nursing, the Department of Allied Health Professions, and PGCE students. Students have studied at St Luke’s for more than 160 years and although much has changed over the years the campus has retained a vibrant, collegiate atmosphere in which everyone soon gets to know each other. As you walk through the arches of the traditional North Cloisters you will see the lawns of the quadrangle surrounded by modern teaching buildings. Academic facilities include a library, IT facilities and support and modern seminar rooms and lecture theatres. Sports facilities include an indoor heated swimming pool, sports hall and an air-conditioned health and fitness studio. We invested £1.7 million in 2018 in Cross Keys, a high quality multipurpose space on campus. This has created a social heart to St Luke’s Campus, including a café and a large space for students to meet, eat and study. A £10.5 million upgrade to the South Cloisters was completed in 2015, providing additional, cutting-edge teaching and research space along with new dedicated space for the teaching of Medical Imaging. The Students’ Guild organises many events and activities on campus, but students at St Luke’s also take full advantage of all the academic, social and sporting facilities at the Streatham Campus, which is about a 25-minute walk or a short bus ride away. Bus services run very frequently between the campuses.

Our Penryn Campus is consistently ranked highly for satisfaction: students report having a highly personal experience that is intellectually stretching but great fun, providing plenty of opportunities to quickly get to know everyone. Currently supporting around 6,000 students, the campus – shared with Falmouth University – combines the latest academic research and residential facilities with an intimacy, energy and friendliness. The diversity of students’ interests and backgrounds gives the campus a unique vibrancy. Though we have one of the UK’s smallest TEF Gold university campuses, we excel in tackling some of the world’s biggest challenges through our research, which informs our teaching. Students respond positively to how we do this; they report exceptionally high levels of satisfaction with academic staff, improved communication skills and confidence. Issues related to the environment and sustainability underpin much of the campus’s ethos; these themes recur throughout our degree programmes as well as in student societies, clubs and the running of the campus. The campus is constantly developing, most recently the £12 million extension to the existing Science and Engineering Research Support Facility (SERSF), which builds upon the £30 million investment in the Environment and Sustainability Institute (ESI). Cumulatively, these facilities put not only the University, but also Cornwall as a whole, at the forefront of research aiming to solve problems associated with environmental change. Other recent additions include the Renewable Energy Engineering Facility (REEF) and a £1.2 million Masters Suite. A £4 million sports centre and nursery, and a prestigious Green Flag Award for our grounds, help make this campus a great place to study, work and live.

BA in Ancient History and Archaeology

BA in Archaeology and Anthropology

BA in Classical Studies and English

BA in Classical Studies and Philosophy

BA in Classical Studies and Theology

BA in English and Creative Writing

BA in English and Drama

BA in English and History

BA in English and Modern Languages

BBL Bachelor of Business and Laws

BEng in Engineering and Entrepreneurship

BEng in Engineering and Management

BSc in Accounting and Business

BSc in Accounting and Finance

BSc in Archaeology with Forensic Science

BSc in Biological and Medicinal Chemistry

BSc in Business and Management

BSc in Computer Science and Mathematics

BSc in Conservation Biology and Ecology

BSc in Economics and Finance

BSc in Economics and Politics

BSc in Economics with Econometrics

BSc in Marketing and Management

BSc in Mathematics and Data Science

International Foundation in Accounting and Finance, and Management

International Foundation in Mathematics with Economics, Finance and Management

International Year One in Accounting and Finance

International Year One in Accounting and Finance

International Year One in Engineering

International Year One in Management and Business Economics

International Year One in Mathematics with Accounting, Economics, Finance or Management

International Year One in Psychology

MEng in Engineering and Entrepreneurship

MEng in Engineering and Management

MSci in Biological and Medicinal Chemistry

MSci in Computer Science and Mathematics

MSci in Mathematics and Data Science