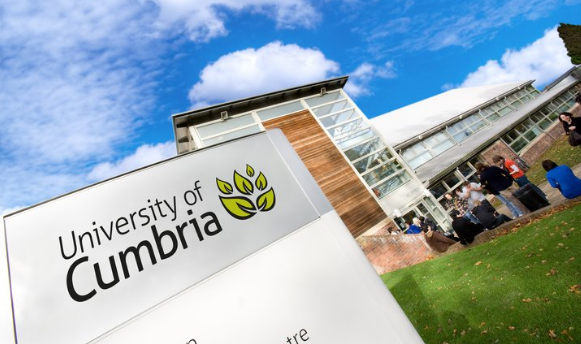 National Ranking: 128
Report an Error in the content of this Page
This Institution is not directly represented by us and applications / visa support (to them) attract a nominal charge

The University of Cumbria is a good investment of your time and skills, as we focus on preparing you for your career. With close links to local Law Firms, Police Forces and Youth Centres, NHS Trusts, Schools and Colleges and Practicing Artists (plus many more) the knowledge you gain on your course is geared towards getting you a job as soon as you graduate! That's why 97% of our graduates enter employment within 6 months of graduating. Talk to us today to begin your journey with us.

We offer exciting research-informed academic studies, professionally focused courses and technical skills so you can achieve your future career ambitions. We enrich our students so that they can realise their potential and achieve life-changing outcomes.

The University of Cumbria was formed in 2007 by the merger of St Martin’s College, Cumbria Institute of the Arts and University of Central Lancashire’s Cumbria sites, operating from campuses spread across Cumbria and North Lancashire. We may be a relatively new university, but we are steeped in history dating right the way back to 1822.

The university is continuing to grow, expanding in geographical terms as well as academic scope.

Cumbria Institute of the Arts has a long history in Carlisle which began with the establishment of the Society for the Encouragement of Fine Arts in October 1822.

A new Academy of Arts was established in 1823 and in 1950 was renamed as the Carlisle College of Art. The institution was officially designated a higher education institute on 1 August 1997.

To reflect its academic growth and development, the institution gained approval from the privy council to change its name to Cumbria Institute of the Arts in 2002.

The institution was a founding member of AGHEC (Advisory Group for Higher Education in Cumbria) which was established in July 1999 by HEFCE to include the HEIs represented in Cumbria, Cumbria County Council and the North West Regional Development Agency.

In 2003, AGHEC transferred into University Education in Cumbria (UeC) working with Sir Brian Fender. The work undertaken by UeC underpins the current establishment of the University of Cumbria.

The Lancaster campus of the University of Cumbria started life as a barracks for the King's Own Royal Regiment and it was this association which gave the teaching college its name - St. Martin's - after a Roman soldier who converted to Christianity.

With the kind permission of the Museum for the King's Own Royal Regiment we have a gallery of images from their archive and a collection from our own.

The King’s Own Royal Regiment vacated the barracks and the site was purchased by the Church of England. Former armouries, barracks and other buildings were converted and others demolished to be replaced by new buildings designed by Charles Pike.

Post-war review of teacher training led to the instigation of Lancaster College of Education 1962. The first intake of 89 students (supported by 13 staff) was in 1964.

From the start, the college planned to teach degrees as well as Certificates of Education and pioneered the four year BA Hons with QTS. By 1966 the college was teaching PGCE students.

The college developed courses in nursing and later radiography, occupational health, social work and continuing professional development courses for health professionals. Strong relationships were forged with NHS trust training departments, and many health professionals can be seen proudly wearing both St. Martin’s and University of Cumbria badges on their uniforms to this day.

The college developed courses in humanities, arts and sport, and a mini building boom ensued in the late 1990s with the development of the Sports Centre, Humanities building, Hugh Pollard Lecture Theatre and new accommodation.

In the late 1990s St. Martin's took over the management of Charlotte Mason College in Ambleside. The London campuses followed, strengthening the emphasis on teaching.

The acquisition of the former hospital buildings at Fusehill Street in Carlisle saw the expansion of health, teaching, arts, humanities and business courses in Cumbria.

The Carlisle campus developed with new halls of residence, a sport centre and in 2006 the Learning Gateway building.

In 2006 the College embarked on its journey to secure University Title and Taught Degree Awarding Powers (TDAP). Following review by the Quality Assurance Agency the College received approval from the Privy Council on 10th July 2006 in respect of TDAP.

Born in 1842, Charlotte Mason was an experienced school teacher who passionately believed in the importance of education for all members of society regardless of gender or social class. Charlotte’s philosophy was that children should be valued as people and should be educated through real situations.

After 15 years of teaching at primary level, Charlotte began to publish her ideas on childhood education and subsequently published regularly in Parents' Review. In 1891 she moved to Ambleside and set up a training school.

After her death the school was managed by the county until the 1990’s when it became part of Lancaster University. St. Martin’s College took over the management of the college in the late 1990s.

During this period the Charlotte Mason building was built; a home for the library and student resources. At the same time outdoor courses were developed from Hill Top building and business courses at the former Kelsick School building, a short distance from the main campus.

In 2012 we launched our innovative Institute for Leadership and Sustainability (IFLAS) at our Ambleside campus. Major redevelopment work of the Ambleside campus started the following year, and in 2014 the Lake District campus officially became home to the National School of Forestry, the Centre for Wildlife Conservation and our outdoor studies courses - more outdoor students study with us than with any other higher education institution in Europe.

The university’s commitment to provision in London continued, with its campus (originally created by St. Martin’s College) relocating to new premises in East India Dock Road in 2013.

Other developments in 2013 included the creation of our University of Cumbria Business School at our Lancaster campus and the launch of Carlisle Business Interaction Centre at Paternoster Row.

One of our major goals is to grow university participation in west Cumbria. Since 2009 we have been delivering courses at Energus, Workington, and in 2013 we opened our University Centre at Furness College, Barrow-in-Furness.

It’s great you are considering studying at the University of Cumbria! Here are some of the reasons our international students have chosen us.

Are you are an international student & would you like to learn more about studying in the UK at the University of Cumbria?

1. LOCATED IN ONE OF THE UK’S TOP TOURIST DESTINATIONS
Where better to live and study than in one of the most attractive tourist destinations in the UK?

Our students enjoy the best of both worlds – great cities with excellent transport links, and some of the most beautiful coast and countryside the UK has to offer. Come and experience it for yourself!

2. SMALL AND FRIENDLY CAMPUSES IN SAFE CITIES
Here at Cumbria, our small and friendly campuses provide a welcoming and supportive environment where you can quickly begin to feel at home. What's more, our campuses are located in pleasant, medium-sized cities, which are clean and safe – reassuring for our students and their parents!

3. A QUALITY EDUCATION
The quality of our education and the student experience is at the heart of everything we do at the University of Cumbria. Many of our programmes record 100% student satisfaction.

Unlike many universities, we have small class sizes and can offer you a more personal experience, something that our international students tell us that they really value. Here at the University of Cumbria, your tutors will take time to get to know you and understand your needs – all part of their commitment to helping you succeed!

The Guardian University League Tables for 2017 recognised the quality of our programmes and placed us:

4. AWARD-WINNING STUDENT SUPPORT
We have lots of experience of supporting our students' differing requirements, both in their academic studies and personal lives - help is always at hand. Our exceptional student support was recognised by the award of ‘Outstanding Student Support Team’ in the Times Higher Leadership and Management Awards of 2014.

HIGH EMPLOYABILITY
Our graduates have an amazing employability record, with 9/10 in employment or further study six months after graduation.

A university education is a positive investment for your future, and our enviable employability record is proof of the value a University of Cumbria degree holds to both our graduates and employers.

6. GUARANTEED ACCOMMODATION
We guarantee you a room on campus for your first year if you apply by the deadline.

Living on campus is very convenient, with lots of opportunities to make friends and take part in sports and social activities.

Awards
All awards are defined in terms of the number of credits that must be attained to achieve the award. Learning is arranged in defined blocks called modules which have credit values. Combinations of credit rated modules are approved by the University’s Academic Board to form programmes which lead to awards or certified learning.

Where specifically approved at validation, entry may be via foundation study at level 3. The credit requirements at level 3 and for the award are denoted by the figures in brackets.

The Fusehill Street campus has been the setting of life-saving treatments since World War I. Now, it's home to world changers, life-savers, crime fighters, and entrepreneurs with access to high-quality facilities and innovative thinking.

Located just outside the city, right on top of Hadrian's Wall, the Brampton Road campus is full of history, buzzing with excitement, creativity, and a sense of endless possibility. The home of creators, entertainers, rule breakers, and change-markers.

Nestled in the Lake District National Park, a UNESCO World Heritage site, the Ambleside campus is the perfect place for world-savers, animal lovers, and adventurers. There is never a dull moment when surrounded by such natural beauty and opportunity.

Lancaster is the Red Rose heartland, a student haven full of history and culture. With iconic stone architecture, parkland, and a caring community, this is the place to get involved. The campus houses top-quality facilities tailored to the needs of life-savers, world changers, and future leaders.

Just steps away from the iconic Canary Wharf sits the London campus. A hub of opportunity tailored to nurturing future leaders, world changers, and live-savers in the capital city. Make an impact when you study at the London campus.

Set in the heart of Barrow-in-Furness, the Barrow Campus offers higher education courses in a convenient location. With state-of-the-art facilities and placement opportunities, this is the place where students become life-savers.

The Workington campus is situated inside the Energus Building, a hub of business innovation in West Cumbria. With a longstanding industrial heritage, Workington is the perfect place to train future leaders and project managers.

Dip HE English Literature (Dip HE)