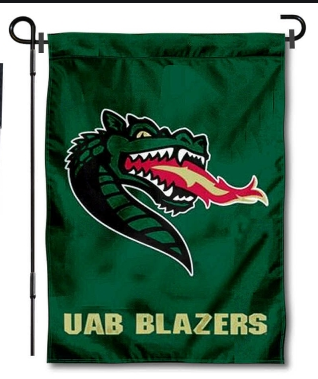 University of Alabama at Birmingham

National Ranking: 95
Report an Error in the content of this Page
Direct Representation

University of Alabama at Birmingham

UAB offers 140 programs of study in 12 academic divisions leading to bachelor's, master's, doctoral, and professional degrees in the social and behavioral sciences, the liberal arts, business, education, engineering, and health-related fields such as medicine, dentistry, optometry, nursing, and public health. In the fall of 2019, 22,080 students from more than 110 countries were enrolled.

The UAB Health System, one of the largest academic medical centers in the United States, is affiliated with the university. UAB Hospital sponsors residency programs in medical specialties, including internal medicine, neurology, physical medicine and rehabilitation, surgery, radiology, and anesthesiology.

UAB is the state's largest single employer, with more than 23,000 faculty and staff and over 53,000 jobs at the university and in the health system. An estimated 10 percent of the jobs in the Birmingham-Hoover Metropolitan Area and 1 in 31 jobs in the state of Alabama are directly or indirectly related to UAB. The university's overall annual economic impact was estimated to be $7.15 billion in 2017.

In 1936, in response to the rapid growth of the Birmingham metropolitan area and the need for the population to have access to a university education, the University of Alabama in Tuscaloosa established the Birmingham Extension Center.[8] The center operated in an old house in downtown Birmingham at 2131 6th Avenue North and enrolled 116 students. In 1945, UA's newly established four-year School of Medicine moved from Tuscaloosa to Birmingham and took over management of Jefferson and Hillman hospitals. In 1957 enrollment at the extension center stood at 1,856. By 1959, research grants, training grants, and fellowships exceeded $1 million, and ground was broken for a new Children's Hospital.

By the 1960s, it grew apparent that the extension center was becoming a university in its own right. An engineering building was built close to the medical center in 1962, and in November 1966, the Extension Center and the School of Medicine were merged into the University of Alabama in Birmingham, with Dr. Joseph Volker as "Vice President for Birmingham Affairs"–reflecting that it was still treated as an offsite department of the main campus in Tuscaloosa. An Advisory Board for UAB was created in 1967. In 1969, the legislature created the University of Alabama System. UAB became one of three four-year institutions within the new system, which also included UA and the University of Alabama in Huntsville (UAH) in Huntsville. Volker became UAB's first president.

In the 1970s, the university began a period of rapid growth. Enrollment at the beginning of the decade stood at 6,629, including 2,724 women. To accommodate the growing student population, UAB acquired land in the Southside. UAB Mini Park (the predecessor to The UAB Green) was dedicated in 1977.

The university created an intercollegiate athletic program, joined the NCAA and began fielding teams beginning with golf in 1970 and men's basketball in 1978. The university's name was changed to the University of Alabama at Birmingham in 1984, simply exchanging the preposition "In" for "at."

By 1990, UAB had awarded its 50,000th degree. In 1992, U.S. News and World Report named UAB as the #1 up-and-coming university in the United States. In 1993, UAB's economic impact on the Birmingham region was estimated at more than $1.5 billion per year (the figure would be $2 billion per year by 1998). In 1994, UAB became the first Alabama university to achieve "Research University I" status in the Carnegie Foundation classification.

At UAB, we have never settled on merely finding what’s next—we have helped build the future through new ideas and initiatives in the classroom, the laboratory, the studio and the clinic. UAB’s vision, mission and shared values provide a foundation for the strategic plan, Forging the Future.

Vision
One university inspiring and empowering the creation of knowledge that changes the world.

Mission
UAB serves students, patients, the community and the global need for discovery, knowledge dissemination, education, creativity and the application of groundbreaking solutions. We are a leader among comprehensive public urban research universities with academic medical centers.

Shared Values
Integrity – We act ethically and do what is right.
Respect – We treat others with courtesy and civility.
Diversity and inclusiveness – Everybody counts every day. We actively seek varied perspectives in our decision-making.
Collaboration – We trust each other and work cooperatively across disciplinary boundaries in the spirit of shared governance.
Excellence and achievement – We constantly innovate, solve problems and improve ourselves and others through learning.
Stewardship – Fiscal and environmental sustainability guide our decisions.
Accountability – We are answerable to each other and act with the best interests of the university in mind.
Our vision, mission and values provide a framework and common language for collaboration and strategic goals that will build on our strong foundation. We serve students and patients while recognizing that we are also embedded in a vibrant community.

In the 2021 U.S. News & World Report rankings, UAB was tied for the 153rd best national university and was ranked tied for the 71st best public university. The UAB Master of Science in Health Administration program is the top ranked Health Care Management program in the U.S. News & World Report rankings and the only No. 1 program at UAB. Since 2015, the MSHA program has been the highest-ranking program at UAB.

In 2018, UAB was named the Top Young University in the U.S. (50 years or younger) and among the top 10 globally in the Times Higher Education World University Rankings, which ranks effectiveness in areas such as teaching, research, citations, international outlooks and industry outcomes.

ENGLISH AS A SECOND LANGUAGE, MAED