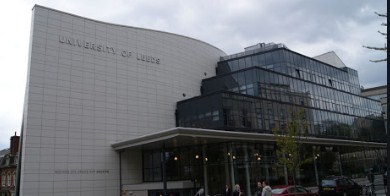 National Ranking: 10
Report an Error in the content of this Page
This Institution is not directly represented by us and applications / visa support (to them) attract a nominal charge

The University, established in 1904, is one of the largest higher education institutions in the UK. We are renowned globally for the quality of our teaching and research.

The strength of our academic expertise combined with the breadth of disciplines we cover, provides a wealth of opportunities and has real impact on the world in cultural, economic and societal ways.

The University strives to achieve academic excellence within an ethical framework informed by our values of integrity, equality and inclusion, community and professionalism.

Leeds was ranked joint 19th (along with the University of St Andrews) amongst multi-faculty institutions in the UK for the quality (GPA) of its research and 10th for its Research Power in the 2014
Between 2014-15, Leeds was ranked as the 10th most targeted British university by graduate employers, a two place decrease from 8th position in the previous 2014 rankings
The 2016–2017 the Times Higher Education World University Rankings ranked Leeds as 133rd in the world. The university ranks 117th in the world in the CWTS Leiden Ranking.
Leeds is ranked 116th in the world (and 14th in the UK) in the 2016 Round University Ranking. Leeds has also been named University of the Year 2017 by The Times and The Sunday Times’ Good University Guide. In 2019, it ranked 150th among the universities around the world by
The university won the biennially awarded Queen's Anniversary Prize in 2009 for services to engineering and technology. The honour being awarded to the university's Institute for Transport Studies (ITS) which for over forty years has been a world leader in transport teaching and research

In 2008, the Leeds University Union became the first student union to achieve Gold Status in the Students' Union Evaluation Initiative (SUEI). A feat only matched by the University of Sheffield Union of Students in mid 2010.

Arabic and Russian A BA

Arabic and Russian B BA

Biology and History and Philosophy of Science BSc

Chemistry with a Year in Industry MChem, BSc

Chinese and Italian B BA

Chinese and Russian A BA

Chinese and Russian B BA

Classical Literature and Italian B BA

Classical Literature and Russian B BA

English and History of Art BA

History and History of Art BA

History and Philosophy of Science and Physics BSc

History and Philosophy of Science and Politics BA

History and Philosophy of Science and Theology and Religious Studies BA

International Relations and Politics of the Middle East MA

Italian B and Japanese BA

Italian B and Portuguese BA

Italian B and Russian A BA

Japanese and Russian A BA

Japanese and Russian B BA

Language for Arts and Humanities

Language for Business Management and Enterprise

Language for Business: Economics and Finance

Language for Communication and Society

Language for Economics and Finance

Language for Politics and Society

Language for Social Science and Arts: Arts and Humanities

Language for Social Science and Arts: Communication and Society

Language for Social Science and Arts: Politics and Society

Medicinal Chemistry with a Year in Industry MChem, BSc

Philosophy and History and Philosophy of Science BA

Philosophy of Religion and Ethics MA

Portuguese and Russian A BA

Portuguese and Russian B BA

Statistics with Applications to Finance MSc

Teaching English to Speakers of Other Languages (Teacher Education) MA

Teaching English to Speakers of Other Languages (TESOL) BA

Teaching English to Speakers of Other Languages for Young Learners MA

Teaching English to Speakers of Other Languages MA

Teaching English to Speakers of Other Languages MEd

Theatre and Performance with Enterprise BA