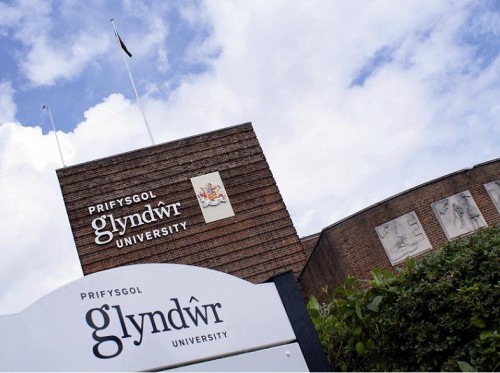 National Ranking: 12
Report an Error in the content of this Page
This Institution is not directly represented by us and applications / visa support (to them) attract a nominal charge

Wrexham Glyndwr University is a learning community focused on inspiring its students to aim higher and achieve more.

From a rich history to a bright future for education in North Wales - Wrexham Glyndwr University gives each student's learning and future personal attention.

Our name comes from Welsh scholar and hero Owain Glyndwr and we aim to champion some of the same philosophies as him.

His spirit lies at the heart of Wrexham Glyndwr University where we set out to be bold, enterprising and open to all in everything that we do.

We’ve been delivering education at our main Wrexham campus since 1887, when we were known as the Wrexham School of Science and Art. We first started offering degrees in 1924 but we've come a long way since then.

We became Denbighsire Technical Institute in 1927, moving to Regent Street, now home to our creative arts courses. As the Institute and demand for courses grew, the development of what is now our main Plas Coch campus began and the Denbighshire Technical College was born in 1939.

Sir Patrick Abercromby, the famous Liverpool-Dublin architect, was responsible for the internal design of the College, which featured in a number of Architecture magazines in the early 1950s. Peggy Angus was commissioned to design suitable tiles for the main foyer. These were unique to the College and represent a flow of learning with a Welsh background. These tiles are still in place today and are protected as a Grade II listing.

it soon became necessary to merge the three main colleges of the County of Clwyd: Denbighshire Technical College, Cartrefle Teacher Training College (situated at the other end of Wrexham) and Kelsterton College in Connah's Quay near Chester.

The resulting North East Wales Institute of Higher Education (NEWI) became one of the largest colleges of its kind in Britain with over 9,000 students and an annual budget in 1975 of £5 million.

The College grew both in the number of students and in reputation as its expertise became sought after throughout the world.

In 2008, NEWI gained university status and Glyndwr University was born.

Inspire and enable through higher education.

Our mission is to inspire and enable through higher education, research and engagement; working together with our students, staff and partners. Our activity is underpinned by our core values:

Accessible
We are passionate advocates for lifelong learning and believe that background and circumstance should not be a barrier to engaging with higher education. We are dedicated to accessibility, fairness and inclusivity in how we teach, research and provide our services.

Supportive
We foster a supportive environment to encourage our staff and students to work together to achieve their learning, research and career goals. We care about our communities and proactively lead and support initiatives that enrich the local economy and the lives of local people.

Innovative
We do things differently. We recognise that our success is dependent upon the collective energy, intelligence and creativity of the university community. We actively encourage new perspectives and innovation in teaching, research and our engagement with communities and partners. We question the status quo and are brave enough to embrace new ways of doing things. This enables our culture, structure, policies and people to drive excellence and respond effectively to need.

Ambitious
We are unashamedly ambitious for our staff, students and our communities. We recognise that there are no limits to learning and knowledge and we challenge people to embrace their aspirations and succeed through education. We are accessible in the learning we provide for our students, staff and community, being pro-active in promoting the value of higher education. This is grounded in a dedication to be inclusive and fair in how we provide our services.

The University’s mission and values find expression in the vision for our four strategy domains: teaching that inspires, research that transforms, engagement that enables and structure that sustains.

The North Wales School of Art and Design at Wrexham Glynd?r University was named as the best place to study Art in Wales in the Guardian University League Tables 2017 and also ranked 12th out of all UK universities.

Celebrations as prestigious Advance HE award recognises the quality of teaching at Wrexham Glynd?r University

Our biggest campus and where Wrexham Glyndwr University began in 2008 or 1887, if you trace back through our history.

The university’s rural home for animal sciences education; a dedicated centre for animal and human interaction and wellbeing

Bringing together academia and industry, activities at St Asaph are centred around high-level opto-electronics technology

Doctor of Philosophy (PhD) in Analytical and Forensic Chemistry

Doctor of Philosophy (PhD) in Forensic Anthropology and Bioarchaeology

Doctor of Philosophy (PhD) in Psychology

Doctor of Philosophy (PhD) in Sport, Exercise and Health Science

Master of Philosophy (MPhil) in Analytical and Forensic Chemistry

Master of Philosophy (MPhil) in Forensic Anthropology and Bioarchaeology

Master of Philosophy (MPhil) in Psychology

Master of Philosophy (MPhil) in Sport, Exercise and Health Science

Master of Research (MRes) in Analytical and Forensic Chemistry

Master of Research (MRes) in Forensic Anthropology and Bioarchaeology

Master of Research (MRes) in Psychology

Master of Research (MRes) in Sport, Exercise and Health Science