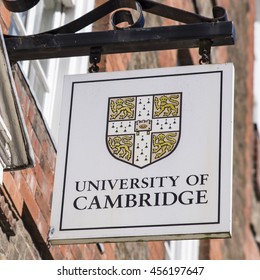 National Ranking: 1
Report an Error in the content of this Page
This Institution is not directly represented by us and applications / visa support (to them) attract a nominal charge

The University of Cambridge is rich in history – its famous Colleges and University buildings attract visitors from all over the world. But the University's museums and collections also hold many treasures which give an exciting insight into some of the scholarly activities, both past and present, of the University's academics and students.

The University is one of the world's oldest universities and leading academic centres, and a self-governed community of scholars. Its reputation for outstanding academic achievement is known worldwide and reflects the intellectual achievement of its students, as well as the world-class original research carried out by the staff of the University and the Colleges.

When we first come across Cambridge in written records, it was already a considerable town. The bridge across the River Cam or Granta, from which the town took its name, had existed since at least 875. The town was an important trading centre before the Domesday survey was compiled in 1086, by which time a castle stood on the rising ground to the north of the bridge, and there were already substantial commercial and residential properties as well as several churches in the main settlement which lay south of the bridge.

Within the town, or very close to it, there were a number of other religious institutions. There had been canons in the Church of St Giles below the castle before 1112, when they moved to a new site across the River Cam at Barnwell, and the Convent of St Radegund had existed since 1135 on the site which eventually became Jesus College. There were also two hospitals, one reserved for lepers at Stourbridge, and a second, founded for paupers and dedicated to St John, which after 1200 occupied the site where St John's College now stands. Seventeen miles north of the town was the great Benedictine house of Ely which, after 1109, was the seat of a Bishopric.

There was thus much to bring clerks (clergymen) to the town, but traders were also attracted to it. After about 1100 they could reach Cambridge easily by the river systems which drained the whole of the East Midlands, and through Lynn and Ely they had access to the sea. Much wealth accumulated in the town, and the eleven surviving medieval parish churches and at least one handsome stone house remain as evidence of this. There were food markets before 1066, and during the twelfth century the nuns of St Radegund were allowed to set up a fair on their own land at Garlic Lane; the canons of Barnwell had a fair in June (later Midsummer Fair), and the leper hospital was granted the right to hold a fair which developed into the well-known and long-lasting Stourbridge Fair.

By 1200, Cambridge was a thriving commercial community which was also a county town and had at least one school of some distinction. Then, in 1209, scholars taking refuge from hostile townsmen in Oxford migrated to Cambridge and settled there. At first they lived in lodgings in the town, but in time houses were hired as hostels with a Master in charge of the students. By 1226 the scholars were numerous enough to have set up an organisation, represented by an official called a Chancellor, and seem to have arranged regular courses of study, taught by their own members. From the start there was friction between the town and the students. Students, usually aged about fourteen or fifteen, often caused disturbances; citizens of the town, on the other hand, were known to overcharge for rooms and food. King Henry III took the scholars under his protection as early as 1231 and arranged for them to be sheltered from exploitation by their landlords. At the same time he tried to ensure that they had a monopoly of teaching, by an order that only those enrolled under the tuition of a recognised master were to be allowed to remain in the town.

Mission
The mission of the University of Cambridge is to contribute to society through the pursuit of education, learning and research at the highest international levels of excellence.

Core values
The University's core values are as follows:

The University's relationship with society

List of awards. Carus Greek Testament Prizes awarded to candidates who are given a passage in Greek from the New Testament and asked to translate and interpret it. Wrangler: a student who gains first-class honours in the third year of the University's undergraduate degree in mathematics.

Advanced Diploma in Theology, Religion and Philosophy of Religion

CPGS in Theology and Religious Studies

MPhil in Anglo-Saxon, Norse and Celtic

MPhil in Basic and Translational Neuroscience

MPhil in Chemical Engineering and Biotechnology

MPhil in Engineering for Sustainable Development

MPhil in European, Latin American and Comparative Literatures and Cultures by Advanced Study

MPhil in European, Latin American and Comparative Literatures and Cultures by thesis

MPhil in Film and Screen Studies by Advanced Study

MPhil in Film and Screen Studies by thesis

MPhil in Latin American Studies (by thesis only)

MPhil in Materials Science and Metallurgy

MPhil in Micro and Nanotechnology Enterprise

MPhil in Strategy, Marketing and Operations

MPhil in Theology, Religion and Philosophy of Religion

PhD in Anglo-Saxon, Norse and Celtic

PhD in Biological Sciences at the Department of Veterinary Medicine

PhD in Computation, Cognition and Language

PhD in Film and Screen Studies

PhD in History and Philosophy of Science

PhD in Materials Science and Metallurgy

PhD in Mathematics of Information (CDT)

PhD in Obstetrics and Gynaecology

PhD in Physiology, Development and Neuroscience

PhD in Theology and Religious Studies