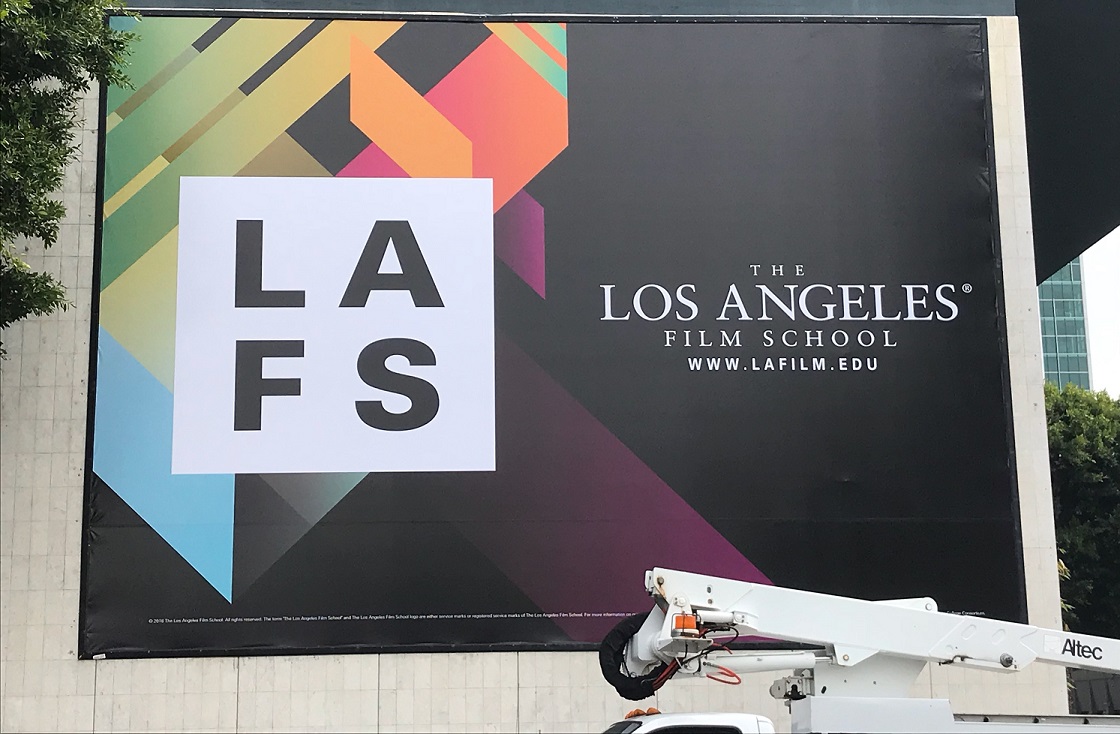 National Ranking: 163
Report an Error in the content of this Page

Almost 100 years after the dedication of Sunset Boulevard, The Los Angeles Film School opened its doors. In a story that includes iconic moments, from the creation of the Walk of Fame to the Hollywood Sign, we are a new chapter. Sunset went from being a cattle path at the turn-of-the-century to the world-famous boulevard where our campus is located today.

22 miles long and following an old cattle path, Sunset Boulevard was dedicated in May of 1904. Sunset may have been its name, but the boulevard’s grand opening was the dawn of a new age in L.A. history, as a parade of automobiles, horse-drawn carriages and electric railcars puttered over the roadway that now connected downtown to the then-independent city of Hollywood.

October 27, 1911, The Nestor Motion Picture Company opened the first movie studio located within Hollywood by renting what was then the shuttered Blondeau Tavern building on the corner of Sunset and Gower for $40 a month. The very first motion picture stage was built behind the tavern.

Situated on Mt. Lee with 45-foot-tall letters, the Hollywood Sign was originally created in 1923 as an advertisement for a local housing development called “Hollywoodland.” In 1949, the Hollywood Chamber of Commerce stipulated that “land” must be removed, spelling out “Hollywood” to reflect the whole district, not just the development.

Grauman’s Chinese Theatre – now TCL Chinese Theatre – opened May 18, 1927. The first wet-cement handprint and signature was from construction foreman, Jean Klossner who autographed his work by the right-hand poster kiosk, where it can still be seen today.

The first Academy Awards was held on May 16, 1929, at the Hollywood Roosevelt Hotel with an audience of 270 people. The cost for a guest ticket to the ceremony was only $5. Emil Jannings won the first Academy Award as Best Actor for his performance in The Last Command and The Way of All Flesh.

Founded on June 4, 1942, Capitol Records was the first West Coast-based record label in the U.S. In 1956, the Capitol Records Tower opened just west of Hollywood and Vine. The building’s design was based on graduate school drawings by Lou Naidorf. Fun fact: it’s only a coincidence that the building resembles a stack of records on a turntable.

With more than 2,600 stars, The Walk of Fame runs 1.3 miles from Gower to La Brea. In the early 1950s, Hollywood Chamber of Commerce president, E. M. Stuart, proposed the Walk of Fame as a means to “maintain the glory of a community whose name means glamour and excitement in the four corners of the world.” Construction began in 1958.

Almost 100 years after the dedication of Sunset Boulevard, the historic RCA Building at 6363 Sunset, used by Elvis and The Rolling Stones, became The Los Angeles Film School. In May 1999, Oliver Stone led the inauguration ceremony and The L.A. Film School began its part in Hollywood’s golden legacy.

Our foundation is built on a rich history of Hollywood entertainment – literally. Our building located at 6363 Sunset Boulevard was originally the historic RCA building, a recording studio, which was used by legendary music artists such as Elvis Presley, The Rolling Stones, The Grateful Dead, Henry Mancini and others, from the time it opened its doors on April 21, 1964 through the 1970s.

The Los Angeles Film School is approved to train veterans by the California State Approving Agency for Veterans Education (CSAAVE). CSAAVE operates under contract with the US Department of Veterans Affairs. Under the authority of federal law, Title 38 U.S.C CSAAVE operates as part of the government of the State of California. The Los Angeles Film School is approved for Army, Air Force, Coast Guard, Marine Corps, Navy and US government tuition assistance through the DODMOU.

The Los Angeles Film School is a member of the Servicemembers Opportunity College Consortium.

The Wrap ranked our film program in its Top 50 U.S. Film Schools list for the third year in a row. This is The Wrap’s fourth annual film school ranking. The Los Angeles Film School moved up in the ranks from the previous years and is in the company of its sister school, Full Sail University.

In its 20th year, LAFS is reaching new heights in the industry. Some 38 LAFS alums worked on 31 productions that earned 121 nominations and 24 wins at the Emmys, including Blake Webster’s Carpool Karaoke: The Series. And 21 alums worked on 12 productions that earned 24 SAG Award nominations and two wins, including Barry and Can You Ever Forgive Me? DP Brandon Trost, a Sundance cinematography prizewinner.

“What a delightful and proud moment for The Los Angeles Film School to be recognized by The Wrap again this year,” said president Tammy Elliott.

“This moment bears witness to our focused, driven and creative students; the care and expert guidance that our faculty and staff provide every day; our exceptional, hands-on experiential educational model; and the industry that continues to partner with LAFS and especially our graduates as they launch and build their careers.”

The accolade coincides with a significant milestone in the school’s history. The L.A. Film School celebrated its 20th anniversary in September and created the Spotlight Academy to honor its alumni success throughout the years. Three of the five members inducted into the Spotlight Academy graduated from the film program. Their careers have flourished within the entertainment industry as they continue to carry on the LAFS legacy.

Associate of Science in Film

Associate of Science in Audio Production

Associate of Science in Music Production

Bachelor of Science in Audio Production

Bachelor of Science in Digital Filmmaking

Bachelor of Science in Entertainment Business

Bachelor of Science in Graphic Design

Bachelor of Science in Media Communications

Bachelor of Science in Writing for Film & TV Degree