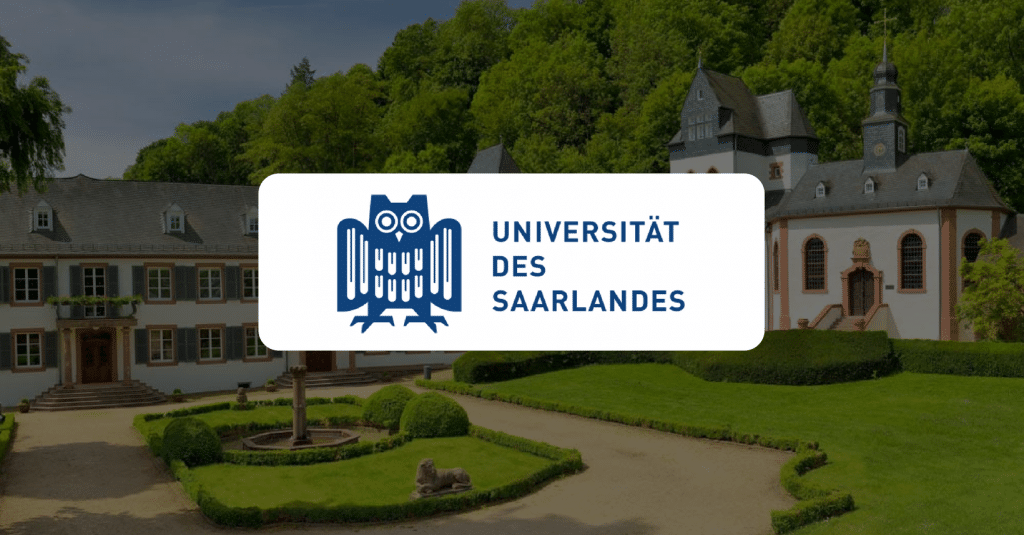 National Ranking: 451
Report an Error in the content of this Page

Saarland University (German: Universität des Saarlandes) is a modern research university located in Saarbrücken, the capital of the German state of Saarland. It was founded in 1948 in Homburg in co-operation with France and is organized in six faculties that cover all major fields of science. In 2007, the university was recognized as an excellence center for computer science in Germany.

Thanks to bilingual German and French staff, the University has an international profile, which has been underlined by its proclamation as "European University" in 1950 and by establishment of Europa-Institut as its "crown and symbol" in 1951. Nine academics have been honored with the highest German research prize, the Gottfried Wilhelm Leibniz Prize, while working at Saarland University.

The university is headed by a board, which includes a president and five vice presidents, responsible for planning and strategy, research and technology transfer, education, and administration and finance, respectively.The president is elected by both the senate and the council in separate votes.

A top research university that offers a supportive and welcoming study environment
International students at Saarland University enjoy the benefits of small learning groups, spacious lab facilities, excellent supervision and personal contact to academic staff. The departments, institutes, laboratories and libraries are all on campus and close at hand. As Saarland University has quality assurance accreditation, the high quality of its academic programmes and the excellent environment for teaching and studying are guaranteed. All degree programmes at Saarland University are internationally recognized.

Leisure and cultural activities on and around campus
Saarland University offers students a very wide range of leisure activities including sports, choirs and orchestras, theatre groups, a cinema and numerous cafés. Although situated in pleasant woodland surroundings, the main university campus is only ten minutes from the city centre. The Centre for International Students (ZiS) offers international students an interesting and varied recreational programme that includes excursions, guided tours, informal get-togethers and numerous cultural events. The ZiS buddy programme is a peer mentoring initiative in which student volunteers from Saarland University help incoming international students to settle in and become acquainted with day-to-day life on campus.

Living in Saarbrucken
Students in Saarbrücken have access to a rich and varied programme of cultural activities (theatres, opera, cinemas, clubs and street festivals) while also benefitting from living costs that are lower than in many other university cities in Germany. 'Der Staden' – a park that runs along the banks of the River Saar – is a great place to relax, especially in the summer. The weekend sees lots of visitors from the neighbouring Lorraine region of France and from Luxembourg. Saarbrücken's close proximity to France is very noticeable at Sankt Johanner Markt with its cafés and colourful market stalls. And it's sunny, too! Saarland is one of the warmest regions in Germany with some of the mildest temperatures throughout the year.

Discovering the region
Saarland is located in the heart of Europe. France is right on Saarland's doorstep, and you can reach Paris from Saarbrücken in just under two hours. France's Lorraine region is only a few minutes away by car, bus or train and Alsace is also not far. The Grand Duchy of Luxembourg is a mere 80 kilometres away from where the countryside provides plenty of opportunities for long walks or hikes. Whether you fancy having breakfast in Sarreguemines, want to take a stroll through Metz, trace history in Verdun or simply experience the cafés of Place Stanislas in Nancy − all these and other destinations in the region are easy to reach from Saarbrücken.